Everything you need to know about Choi Kwang-Do at Ealing this summer can be found in the July/August issue below.

Download Excellence (July/August 2010)
Posted by Jason Wright at 20:40 No comments:

A Closer Look At Belts 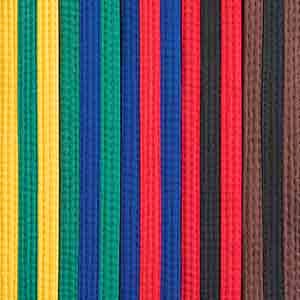 In Choi Kwang-Do, like many other martial arts, the colour of the belt that you have will signify your rank within the system.

Even if you have never taken martial arts before, you'll have some idea that white belt indicates a beginner while black belt indicates someone advanced.

However, aside these two belts, white and black, there is no universal means of ranking within the martial arts world. Different styles (and even different martial art groups teaching the same style) may have a different number of belts and colours of belts in their system. Some martial arts do not use belts at all.

In some styles of martial art a student can earn their black belt within 2 years.
In others it could be as many as 7 years or longer.
In Choi Kwang-Do the is average is around 3½ years.

1. They tell others how much you know about your specific martial art.
2. They imply one's level of technical expertise.
3. They indicate how long you have been training (bear in mind that this last point can be affected by breaks in training).

In addition, the belt system and our movement through it displays progression of learning; a visual indication to both yourself and others on our improvement over time.

Belts also create strong emotions; we all enjoy the feeling of being rewarded for our achievements, like being presented with a new belt if successful at a grading, especially if we've had to work hard towards that achievement involving lots of planning, preparation and training over a period of time...not to mention sweating in the dojang!

In innovation to martial arts, belts give students something to aim for and a reason to keep learning, practising and improving.

What belt are you...and what do belts mean to you?

Our schedule for the summer period is now confirmed.

The last class at Ellen Wilkinson School will be on Wednesday 21st July. After this date, classes continue at:

The dates for these classes will be:

NB. The August Coloured Belt Grading will take place in the classes on Monday 16th and Wednesday 18th August.

Classes then close for summer holidays returning to Ellen Wilkinson School on:

IMPORTANT: Free parking is available at the hotel on a first come first served basis, but clamping is in operation for unauthorised parking.

When you arrive at the hotel you should park first, then go immediately to the hotel Reception and request a parking permit to attend the martial arts class (Reception staff have been informed). You will then need to return to your car to display the permit.
Posted by Jason Wright at 08:59 No comments:

If you are in any way connected to Choi Kwang-Do, or follow Choi Kwang-Do through the various websites, blogs and social media, you will no doubt have seen many comments about the UK seminar in May (not to mention lots of talk about the landmark Choi Kwang-Do seminar in Korea in October 2010).

Seeing Grandmaster Choi perform, teach and talk about the development and evolution of Choi Kwang-Do is highly inspirational for Choi Kwang-Do students and instructors the world over. Many of the images, videos, reports and conversations convey how inspiring the seminar was...and continues to be.

Maybe you were at the seminar yourself?

Or if you weren't at the seminar, imagine you've watched an excellent film on TV or at the cinema.

Or you're engrossed in reading a biography of someone you respect or admire.

We all know that feeling; how each of these events can touch us emotionally, dwell in our minds and inspire or motivate us in different ways.

A great way to get motivated is to associate, watch or read about others who are either successful, or have made achievements in your field of interest. Whether that be martial arts, your current occupation or your desired one.

Part of the reason for this is that by associating yourself with others who are successful will make their goals and stories seem more real to you.

You can also get a feel for the challenges they faced and overcame, which may help you to see how you could overcome them too.

So what inspires or motivates you?

Or if relevant, what motivated you to begin martial arts?