To Spar Or Not To Spar? 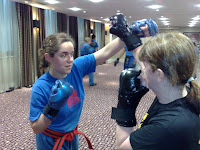 Alongside health and personal development, as a martial art Choi Kwang-Do also has a focus on developing self defence skills. Having said that, the fact that learning Choi Kwang-Do does not entail sparring often raises questions (and a fair amount of criticism).

Sparring is commonplace in many martial arts and can take a number of forms. Loosely speaking, sparring defines students engaging in combat with one another for the purpose of training or competition. Some martial arts allow no contact, some light or semi contact, and some full contact. The rules and format of sparring will vary between different martial arts.

The question is: do you believe that you have to practise sparring to be able to defend yourself effectively?

In Choi Kwang-Do we believe the answer is 'no'.

Based on this premise, Choi Kwang-Do Defence Drills comprise of a series of exercises which allow students to practise and develop their self defence skills progressively with another student.

More specifically, the Defence Drills are geared towards developing the confidence and ability of both students in a safe and controlled manner. (Point to note: Choi Kwang-Do Defence Drills are often described as non contact. I prefer to use the term non impact contact: while no contact is intentionally made when striking your partner, contact is obviously made when blocking).

Working in pairs, the Defence Drills start off by introducing basic foot work and dodging (evading an attack). An attacking partner will move in with punching techniques, and a defending partner will move back, begin to read and anticipate body movement prior to an attack, and dodge accordingly.

Then, instead of merely anticipating body movement, the defending student will start to respond by applying blocks to the attacking punches.

In the next stage of Defence Drills this basic conditioning is extended to include defence against combinations of punches and kicks combined with more advanced footwork, eg. angling off.

As the student’s confidence grows during these preliminary exercises, the Defence Drills become more dynamic and move closer towards a ‘real life situation’; a sudden suprise attack.

At this stage the Defence Drills focus on conditioning the student’s reaction to an attack using both defence (blocking, dodging and footwork), and offence (combinations of punching, striking and kicking). Pre emptive striking is also practised.

Visually, certain Drills may bear some resemblance to sparring, but the explanations above hopefully give an indication of how the drills are designed to develop student ability in a structured fashion.

Attempting to develop self defence skills in a highly stressful and competitive environment such as sparring can drastically impair some student’s ability to work with their partner, and the developing student’s opportunity to learn and develop their abilities. Hence, the Defence Drills begin by being cooperative, rather than competitive. However, once foundation skills are in place students work with increased intensity and intent and less cooperation, whilst maintaining the theme of mutual respect.